Rachel Uffner Gallery is pleased to present a solo booth featuring new paintings by Maryam Hoseini for Frieze New York 2019. This series continues the artist’s exploration of the personal and political effects of displacement while focusing on issues relating to sexuality, gender, and transformation.


Using a sequential format each painting presented here continues a non-liner narrative about the constructed tragedy formed within built social structures of same-gendered intimacy. Hoseini depicts fractured female figures interacting with one another in compressed architectural spaces. Using ink, acrylic paint, and pencil, her subjects are rendered performing daily actions. Inhabiting a realm between fiction and reality, the figures move from one surface to the next, entering, existing, then moving again. In Hoseini’s poetic approach to motion, there is drama, chaos, misfortune, violence, horror and wonder.

The artist’s consideration of physical space is demonstrated through painted architectural extensions; whether through painting on the edges of the panel, which often expand the entire picture plane, and create a sort of illusion by immersing and inserting the panel into the surrounding space, or through site-specific elements – weighted columns of opaque color which extend from the panels directly onto the walls–further conflating the human body with architecture. These interventions function almost as flattened, wrapped dresses, covering an imagined body for which the panel is the head.

Hoseini's installation speaks to the human body in relationship to its environment, considering both the literal structure and the cultural conditions of place. A reoccurring motif in the artist's work, the nude bodies evoke flattened architecture themselves, allowing the figures to become their own diagrammatic schema for a new corporeal architecture - giving us new ways of understanding, configuring and inhabiting bodies.

Hoseini will be featured in Heartbreak, a group exhibition presented by the Ruya Maps Foundation in Venice which will coincide with the Biennale Arte 2019. She will also present a project titled She Models for Her in collaboration with artist Phoebe d'Heurle as a part of The Shed's "Open Call" which opens May 30, 2019. In addition, Art21 will release a profile on Hoseini as a part of their "New York Close Up" series. The video will be released online in mid-June 2019.

Hoseini (b. 1988, Tehran, Iran) earned a BA from Sooreh Art University in Tehran, Iran and dual MFA degrees from the School of the Art Institute of Chicago, Chicago, IL and Bard College, Annondale-on-Hudson, NY. The artist has participated in exhibitions at MoMA PS1, New York, NY; The Arts Club, London, UK; Galerie Isa, Mumbai, India; the Union League Club of Chicago, Chicago, IL; and The Munich Cultural Center at Pasinger Fabrik, Munich, Germany; among others. In 2017, Hoseini had her first solo exhibition, Of Strangers and Parrots, at Rachel Uffner Gallery, New York, NY 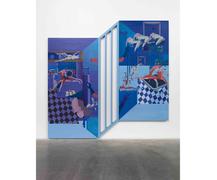