Rachel Uffner Gallery is pleased to present a new body of work by Gianna Commito, the artist’s third solo exhibition at the gallery.

Commito’s work has long referenced architectural archetypes and the layers of urban development patterns. The artist’s new paintings more closely examine the organic and unpredictable aspects of the built environment and explore the subject at a scale that is both personal and engaged. Commito takes the physical repetitions of her daily routine, such as walking a path through her neighborhood to her studio, and reimagines these constants as formal factors in her paintings: the grid, the stripe, the frame, all of which provide a stable underpinning for busy and spontaneous interactions between layers of visual information.

This recent work, in which varied linear forms are knit together, continues to share a similar aesthetic to the weft and warp of textiles. In this manner, Commito subverts the initial structure of the painting by pushing it back and pulling it again to the surface. Very little about Commito’s approach is predetermined, and the artist’s pleasure in working comes from the balancing act of wrestling with colors, patterns, and techniques while also allowing an image to unfold intuitively. The result is an underlying anxiety or slipperiness in the paintings that reveals itself in a delicate alliance between layers.

The process and the environment in which the new pieces were made share the term “fabric” to describe their common ground. This alludes to the social fabric that makes for a healthy interpersonal community in addition to the tactile, interlaced practice of building a painting. These paintings were made in Commito’s small, rustbelt college town, in which intersecting social platforms allow for crossover of community members’ individual pursuits. As in Commito’s work, there is play between the confluence of many different points of view within a confined space, weaving the destabilizing effects of conflict and tension with the respite of harmony and security.

Commito’s combination of materials is the result of years of experimentation with different media and techniques. Wood panels primed with a traditional marble dust and hide glue ground provide a surface durable enough to heavily tape, sand, and layer upon, giving it the physicality of ceramic tile or frescoed wall. This further connects to Commito’s interest in architecture, building materials, and, by extension, her continuing exploration of public versus private space and the development and collapse of manmade environments.

Gianna Commito has exhibited her work at The Drawing Center, New York, Museum of Contemporary Art, Cleveland, Ohio, Wallspace, New York, and Gavin Brown’s enterprise, New York, among other venues. Commito has participated in artist residencies including the Cite Internationale des Arts in Paris, France, the MacDowell Colony in St. Peterborough, New Hampshire, the Bemis Center for Contemporary Art in Omaha, Nebraska, and Yaddo in Saratoga Springs, New York. She was awarded the Cleveland Prize in 2015 and a Pollock-Krasner Foundation Grant in 2004. She lives and works in Kent, Ohio. 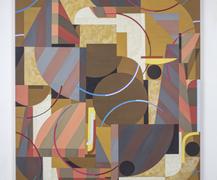