For Summer 2020, Rachel Uffner Gallery is pleased to announce In Real Life, a physical show based on the gallery’s recent online presence, specifically our online viewing room organized for the Frieze NY Art Fair this past May.

Our original plan for the art fair was to mount a solo presentation of new work in the form of an installation by long-time gallery artist, Sara Greenberger Rafferty. With both the cancellation of the real life art fair and the production of artwork due to Covid-19, we had to reimagine the possibilities for our now virtual booth. We decided to show a combination of work by Sara Greenberger Rafferty along with an artist new to the gallery’s program, Arghavan Khosravi. Now, upon reopening to the public, we are taking this opportunity to view the artwork IRL, for the benefit of ourselves and for those who are able to visit us in person.

In our new ground floor gallery, we have installed the three works by Khosravi that we previously showed online, all works generously on loan from their new owners.

We are also very honored to announce our representation of the artist (born in Shahr-e-kord, Iran in 1984). We are thrilled to add Khosravi’s unique voice to our roster which is greatly complimented by her innovative process and highly personal, dynamic imagery.

The artist arrived in the United States in 2015 and has remained here restricted since 2017, when the Travel Ban was signed. Khosravi’s practice is intrinsically linked to personal and paradoxical life experiences of growing up in Iran. This bleeding of Eastern and Western imagery, past and present, religious and secular, reality and fantasy, is symbolic of the tensions the artist faces as an Iranian woman born under ideological autocracy.

In the three paintings presented here, Khosravi weaves multilingual narratives, combining traditional Islamic motifs with surrealist and contemporary visual elements. Each work focuses on the female figure and incorporates imagery of red rope. Often entangling her subjects, the rope is a recurring motif and compositional component which symbolizes the lines drawn by an autocratic power - or, more generally, the oppression of women in patriarchal societies - which must not be overstepped.

In the large ground floor gallery, we are excited to show a selection of important and timely works by Sara Greenberger Rafferty.

The Veldt, 2019, is Rafferty’s largest piece in the medium of kiln-formed glass to date. Utilizing licensed imagery from Adobe Stock photos, here, she selected the most basic glyphs to illustrate measurement (a measuring tape and set squares) and the action of button-pushing (demonstrated by the central figure, a white woman with her back to the viewer). She added images of flies and bees to depict small nuisances, blemishes on the skin, wounds, or other imperfections.

The title of the work refers to Ray Bradbury's short story "The Veldt," written in 1950. In the story, a mother and father struggle with their technologically advanced home taking over their roles as parents, and their children becoming uncooperative as a result of their lack of discipline. The female figure was found through Adobe Stock with the search term of "woman touching screen," and in thinking about technology, Rafferty has essentially created a static touch-screen made of kiln-formed glass.

Accompanied by related works, Level I and Level II, both from 2020, Rafferty considers the material of glass as related to the history of photography as well as the ubiquitous presence of screens in our daily life.

The presentation also includes Rafferty’s video IDENTIFY, 2017, which she conceived while participating in the Smithsonian Artist Research Fellowship in May 2016 and constructed in January 2017 right before Trump’s inauguration. The work was shown in “Gloves Off” her traveling retrospective. Throughout the 18 minute video Rafferty presents footage of Phylis Diller’s joke archive (including jokes about student protests from 1968) interspersed with images from her activities on her phone. The work also contains a cellphone recording of a white woman on a racist rant in a Michaels craft store. Eerily prescient to the summer of 2020, IDENTIFY is a timely observation on the hyper-connectedness of current times, and explores fragmentation, and the languages and behaviors that relate to vehicles of vernacular technology.

Sara Greenberger Rafferty continues to be a pioneering voice through her multi-media works that examine contemporary and mid-20th century visual culture while acknowledging the ever-changing implications for photographic images in the digital era.

Currently on view in the Upstairs Gallery:

Curtis Talwst Santiago’s solo exhibition an erratum, will remain on view in our upstairs gallery until the Fall. This show is a companion to his solo exhibition at The Drawing Center, Can’t I Alter, which opened in February.

Arghavan Khosravi earned an MFA in painting from the Rhode Island School of Design after completing the studio art program at Brandeis University. Khosravi previously earned a BFA in Graphic Design from Tehran Azad University and an MFA in Illustration from the University of Tehran. Khosravi has participated in numerous group exhibitions, at venues such as the Museum of Contemporary Art, Yinchuan, China; Newport Art Museum, Newport, RI; and Provincetown Art Association and Museum, MA; among others. Currently, the artist is working towards a forthcoming solo exhibition in 2021 at the Currier Museum of Art, Manchester, NH. Khosravi is a 2019 recipient of the Joan Mitchell Foundation’s Painters & Sculptors Grant and a 2017-8 recipient of the Walter Feldman Fellowship. The artist’s work belongs to the collections of the Newport Art Museum and the Rhode Island School of Design Museum. Khosravi lives in New Jersey and works in New York as a member artist of the Elizabeth Foundation for the Arts.

Sara Greenberger Rafferty has exhibited widely since 2001, including solo exhibitions at MoMA PS1, New York; The Kitchen, New York; Eli Marsh Gallery at Amherst College, Massachusetts; Fine Arts Center Gallery at University of Arkansas; and a commissioned sculpture for the Public Art Fund. Gloves Off, the first traveling survey of her work with accompanying fully illustrated catalogue published by SUNY Press, completed a three-venue tour in 2018. Rafferty is currently working on her upcoming solo exhibition at the Carnegie Museum of Art. The artist was included in the 2014 Whitney Biennial and the 2014 Hammer Biennial in addition to group shows at the Portland Institute for Contemporary Art, Oregon; Museum of Contemporary Art San Diego, California; and The Jewish Museum, New York, among many others. Her work is included in the collections of the Carnegie Museum of Art, the Solomon R. Guggenheim Museum, the Museum of Modern Art, the Whitney Museum of American Art, and the University of Chicago Booth School of Business. Rafferty is Associate Professor and Director of Graduate Studies in Photography at Pratt Institute in Brooklyn.

*Open for visitors at limited capacity and by Appointment. Physical Distancing Guidelines: We ask that all visitors wear a mask upon entry. Masks and hand sanitizer are available at the gallery. 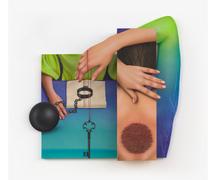 The Thrill of Discovery? What to See in New York Galleries