Rachel Uffner Gallery is pleased to present a booth featuring new works by Bianca Beck and Hilary Pecis at Independent New York from March 5 - 8, 2020.
Bianca Beck (b. 1979, Columbus, OH) brings expressionist painting to a series of biomorphic papier-mâché forms. The artist takes the human figure as a point of departure and considers the expansion of the individual in response to collectivity, expression, creativity, and partnership. Informed by political protest, her practice focuses on the exploration of bodies en masse and the external dynamics of movement and shared experience.
For Independent, Beck presents three large-scale sculptures, each roughly the size of two bodies joining, splitting apart, or transforming together. Beck paints directly onto the sculpture wildly and impulsively, with the movement from her own body responding to the forms like a dance. The sculptures, which Beck accentuates and contours with paint ranging in hue from fluorescents to earth tones, arise from daily
drawings by the artist, which imagine powerful figures in morphing poses. They allude to a myth in Plato’s Symposium, which posits that our original forms were bodies doubled—congenitally tied to a partner and charged with the power of wholeness—these beings were celebratory, acrobatic, and prone to revolt. When installed together, Beck’s sculptures evoke a crowd of colossal figures, as though the human scale has been psychically amplified by its potential, love, pride, and power to connect.
Hilary Pecis (b. 1979, Fullerton, CA) has become known for her acrylic paintings of interiors, still lifes, and landscapes, each imbued with the characteristic light of Southern California. Framed by an intimate perspective—which invites the audience to see from the artist’s point of view— Pecis constructs portraits of friends and family members through collections of personal objects or the details of a specific space. The imagery comes from Pecis’ personal archive of snapshots taken from daily life. Rather than direct recreations, Pecis focuses on details that evoke the feeling of a captured moment, taking liberties with color and form while emphasizing texture and brushstroke.
The paintings presented here continue Pecis’ interest in the history of representational painting. She often includes stacks of monographs, exhibition posters, and works by other artists within her own compositions, allowing for the opportunity to try out different styles alongside her established vocabulary of mark-making. Ultimately, Pecis’ paintings offer entry points for contemplation of the space we occupy and how we overlap with our surroundings.
Pecis’ second solo exhibition, Come Along With Me, at Rachel Uffner Gallery runs concurrently, from March 1 - April 26, 2020. 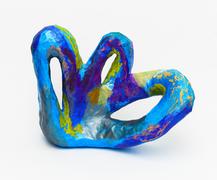 A Striking Balance of New and Rediscovered at the Independent Fair

Looking for Fresh Talent? Here Are 7 Rising-Star Artists to Seek Out at Armory Week 2020 in New York