“The Melancholy” by Lisa Robertson

Everybody was feeling the melancholy. Each felt it in her own way. They used the word melancholy because of global post history. The humour became a politics. The ones who claimed they weren’t melancholic were in denial. Theirs was the deepest form.

Some were just tired, a word they would repeat to themselves vaguely. There was dread. Some had been wrongly accused of certain acts then cast out by those they had previously believed to be their friends and some’s erotic acts were a money. Many’s livelihoods were abolished by the state. This happened gradually, or in a single blow. Some retired to isolation in rooms or in villages—they were in the distance. Some were tried for acts which previously had been lauded acts of freedom. Some tried for decades to survive their institutions. Some kept moving on like a meter. Some raped in groups. Some sought an institution to take them in. Some couldn’t decide. Some wondered about affect. Affect they called it. Some tried to love. Some seemed to prosper. Many’s tumours were the political economy. Some compiled lists of their titles and accomplishments and wore these lists like luxury garments. Some wept at the cash machine. The queer ones. All have a share of both. Some spoke of their immune systems as a landscape. Their health would be pastoral, distopic. Their health would be doused with isopropylamine salt of glysophate, prothioconazole, iprodione. They would eat this and wonder about sadness. Some kept confusing reading with buying. They tried to prevent this. Some tried fleeing. Some just fucked. Some spoke of the melancholy as an autoimmune response to capital. The banal prosetheses, the miniaturized devices, the immaterial products, were entering the interior of the body. The economy was cellular: cells now limitlessly reproduced. The economy was not a metaphor but an event in corporality.

The melancholy was a chora running an unhindered course. It was the legitimate response to the illegitimate propagation of worldly lack. The lack would be overtaken, overcompensated, by unceasing cellular profusion. In this way organisms would wear themselves out.

Within the current province of melancholy, everything else is merely an accessory. The melancholy is administrated. It is thorough.

tears then holes is a group exhibition formed around Pam Lins’ Crying Eyes series—ceramic eyes of varying iris and skin colors, each shedding a single tear. Lins has been producing these eyes every Monday at Greenwich House Pottery in New York’s West Village since Donald Trump took the office of President of the United States.

Lins’ Crying Eyes, installed as a mass grouping, are symbolic in so many ways, as Trump’s presidency has been so emotional, alienating, destructive, oppressive, racist, sexist...the list goes on.

Rachel Uffner Gallery has been attempting to show these works as much as possible since Pam Lins started making them, as there is always something new to cry about whenever the work is shown—some new blatant disrespect for humans and for planet Earth that has an effect on every one of us.

Shedding a tear has become natural, whether it is for ourselves, our loved ones, anger, or for other human beings. An act often negatively associated with weakness or femininity is actually a valid and justified response to our reality.

The exhibition brings together multiple generations of artists—from 12-year-old Serenity Adams to Tony Feher (1956 - 2016)—whose works have confronted emotion and humanity in a variety of ways. 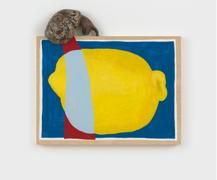